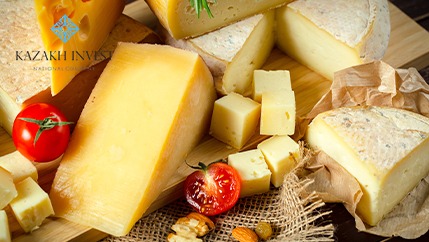 Kazakh investors from "Aksut LLC" LLP plan to produce Italian cheese in Almaty region. Production will take place based on the company’s own cattle farm comprising 1200 heads of the Dutch Holstein-Friesian breed.

As noted by businessmen, the farm daily milks up to 15 tons of milk, and with the release of the design capacity will increase the volume to 30 tons. The company produces high-quality milk and sells its products to the «Dannon» LLP plant.

"Cooperation with development institutes for science, feed production, veterinary medicine and breeding stock reproduction allows companies to develop promising projects for processing and recycling of production waste, tracking the process of milk production on a scientific basis, caring for livestock, reproductions of breeding stock, veterinary control. This also helped us in the decision to implement a new project for the production of cheeses", - said the head of the company Elzhas Sembay.

The company plans to implement a new investment project for the production of cheeses using high-tech Italian equipment. According to experts, this equipment will allow you to produce traditional Italian cheeses of soft and hard varieties, such as mozzarella, Asiago, Ricotta, Cachetta and Grana Padano Parmesan, with a total volume of up to 50 tons per day.

The facility is planned to be commissioned by the end of this year. The project will cost 700 million tenge, which will create an additional 10 jobs.

According to the investor, the implementation of this project will close the production cycle. So, having 2500 thousand hectares of farmland in its crop rotation, the company prepares its own feed, and high-tech equipment allows you to automate and control the process of milk production by conducting digital, round-the-clock monitoring of the entire territory and the entire cycle of production processes.